Vinpire:  a nocturnal creature that lives for the taste of fermented grape juice, as long as it’s red, and often finishes the evening trying to hang upside down from a beam or just falling down without making the effort of first trying to climb on a beam. Its communication consists of sounds that make sense to it alone but to no one else. Has a remarkable homing sense, in the dark, to any establishment selling fine wine”. 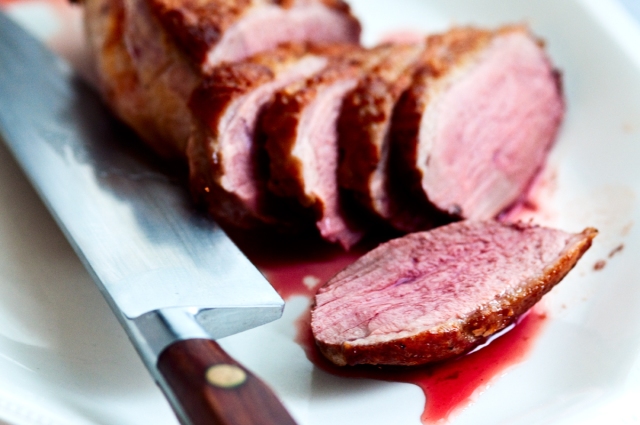 “It is a far, far better thing that I eat now…” were the words that glibly slipped from the Vinpire’s lips, making all his recent posts appear like a perjurer’s signed statement. Lips that had claimed to abhor the crimson tide flowing from the abbatoir were now stained incarnadine ( WordPress offered me Bernadine)  as the result of an orgiastic weekend of visceral blood-letting.  I blame it all on the son of Vinpire who had just flown in, as Vinpires do, for a short visit. Shopping with the SoV starts with fine wine and leads inexorably on to the meaty area. Lulled into the belief that we were only buying meat for photography, my Lord, I suddenly found myself in a meaty conspiracy to produce a steak, mushroom and ale pie under a very short crust pastry, a faux filet served with goose fat roasted potatoes and finally a crisp skinned, bloody duck breast. I never saw it coming, My Lord, I’m an old man and I didn’t realise. I blame it all on the young Vinpire. I’ll keep off the blood, honest, if you’ll just give me another chance.”

52 Responses to The Vinpire sees red….