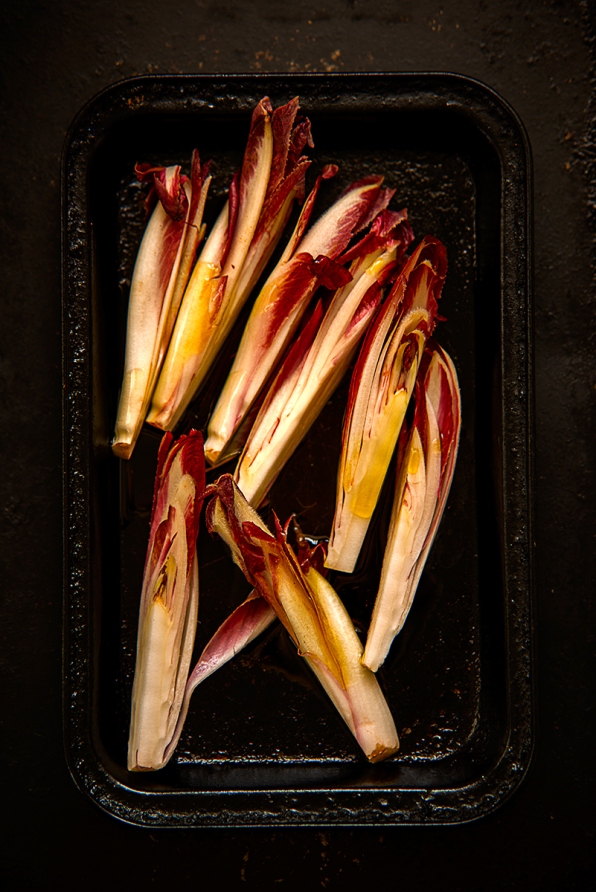 I have always enjoyed eating alone in restaurants; not because I eschew the company of others but because it means I can selfishly choose foods and wines that might have to be the subject of debate and compromise were I to be with a companion. These events tended to take place when I was working in another city or country for a few days or when I sneaked out of the studio to grab a solitary lunch at Moro, St John or the Eagle when I was working in Clerkenwell. Times have changed, as have my tastes, but the memories ….a glass of cidre de garde and roast bone marrow and parsley salad at St John, a plate of jamon Iberico and a couple of glasses of manzanilla at Moro or grilled sardines and salsa verde with a glass of chilled Fleurie at the Eagle…..remain,  scrawled in white chalk on my cerebral blackboard. Endives rouges were added to the blackboard list but a couple of days ago. Endive, in any of its many guises and nomenclatures, is very often the subject of the debates and compromises that I so enjoy not having but, nevertheless, I intend to argue the case for its inclusion, dear readers, on each of your individual cerebral iboards, blackboards or blackberries. Being a “visual” person I am easily seduced by appearances which is how and why a bundle of cream and crimson tight leafed buds of bitterness found their way into my Lidl’s trolley…..the longer I’m in France, the less I go to markets.

Over the years I have photographed endless recipes which included, or had at their heart, endive or radicchio and yet was never drawn to rush home and replicate any single one of them which included a borlotti bean and radicchio purée, by none other than Anna del Conté, of which the head of radicchio was the most beautiful that I have ever seen. The endives rouges that I had bought from Lidl were intended, in truth, to be employed in the same way as their forerunners ……as glamorous models to be shown off in their very best light. The route that they took to the oven and on to my plate was one of chance; the chance being that I noticed a bottle of very good single estate Belazu balsamic vinegar in a cupboard which awoke a memory and whose voice whispered in my ear that charred endive rouge sprinkled with the finest balsamic was a very good thing indeed. The endives were quartered lengthwise and each quarter halved. These were laid on an oven tray, moistened with some olive oil and put into a very hot oven ( 210C ) for about 12 minutes, then taken and given the balsamic treatment….and they were very good with bread and wine.

37 Responses to on eating alone…