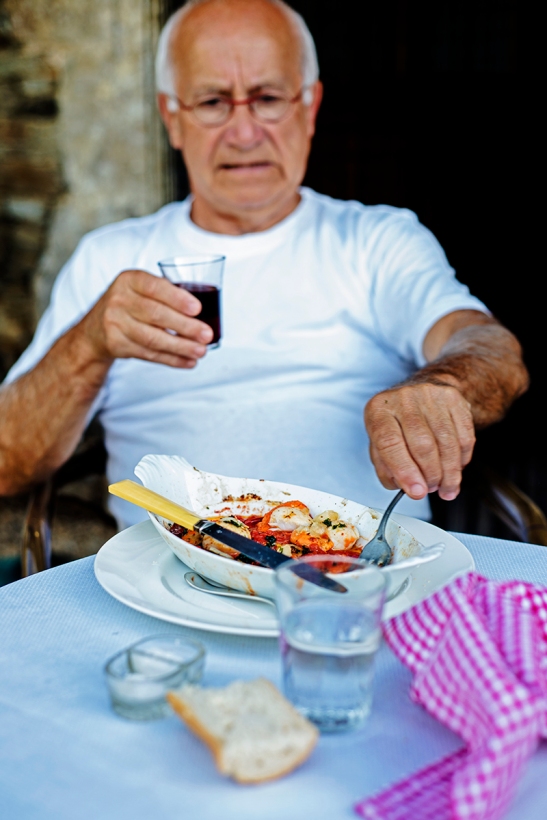 It is hard to imagine that the man in this picture, well known forhis even temperament, could be so tormented by an intransigent still life, otherwise known as dinner, and the vagaries of a camera self timer: and yet, it had all started so well. The kitchen had been calm: a culinary temple wherein was being performed that ancient ritual whereby man, with the aid of fire, transforms sacrificial beasts into lunch or dinner. Beasts, in this kitchen, are not necessarily four legged nor even, for the most part,

legged at all. The red and bloody beast beneath my knife was completely free of any ambulatory appendages  but was no less a beast for the lack of them: the two thick meaty slices cut from this tomato, a native of my neighbour’s potagère, were to be the turf upon which would be placed the surf; a tsunami of coral edged scallops flecked with the green of flat parsley and the ivory of slivered, buttery garlic. Tomatoes in a hot oven for 30 minutes topped with scallops pan fried in butter with parsley and garlic:the plan was so simple and so we steamed quietly on towards the iceberg. It is said that we humans perform a great many of our normal functions unconsciously; driving a car is such a moment when each combination of movements between hand, foot and eye are not individually considered yet occur at the right moment…..for the most part. As I took the very hot tomato dish out of the very hot oven my automatic pilot was pouring a glass of red. Without his aid I performed a masterly fuck up of prestidigitation which resulted in a proportion of the hitherto perfect roast tomato slices being scattered over the open oven door whilst the dish containing the remains had taken on the look of a gaping wound of the sort that, in a hospital drama, would prompt our surgically masked hero to quietly intone “I’m going to have to call it…”. I, on the other hand dug deep into the mine of arcane profanity from where I conjured monstrous conjunctions of scallops fornicating with the inept cunts who had constructed the oven on whose door I was currently burning my arm. 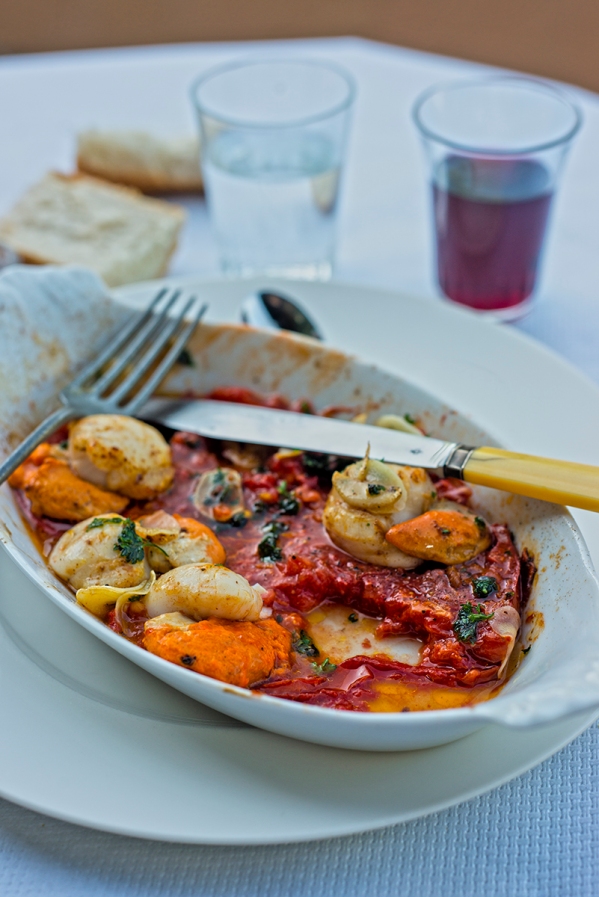 I have long held the view that cosmetics have no place in cooking and this dish of scallops slavishly upheld this principle making me wonder whether minimal makeup might occasionally override the bare faced approach in future forays. However, as I have told myself over and over again, looks are not everything and this dish is very good indeed. As a footnote, it might interest you to know that I found the recipe in a favourite cookery book of mine – “Classic Conran”- and I have only just noticed that the recipe is illustrated with a few ambivalent black and white pictures, unlike the other dishes in the book which are glamourously portrayed in mono saturated colour, and which show little or nothing of scallops and tomatoes…could the well designed Conran fan have been hit by the very same shit that hit mine?