…give a snail a good name …

Raising the profile of snails is not an enviable task. On the face of it, which is hard to define and thus rarely seen, the snail remains a slimy intruder which is either crushed beneath the gumboot or sent sailing over the fence to enjoy our neighbour’s lettuces. Lift a flat stone and there will be slugs and snails but, hopefully, no puppy dog tails…that would be too weird and, if it were true, it would signify that Stephen King was the gardener and now would be a good time to leave. However, garden soil is supplanted by olive oil when the slug in a shell suit is reborn as ” l’escargot”. The prefix of “gastro” has, until recent years, been an unfortunate one which was, to the great majority, attached either to pain or poshness : gastroenteritis or gastronomy, neither of which was welcome.

The current zeitgeist, with the creation of the gastropub, gastroporn and the gastrodrome, has turned such prejudice on its head which change of heart has made ubiquitous the appearance on our tables of this handsome gastropod in its preferred hot bath of verdant garlic butter . The heros of these pictures are “cagouilles”, celebrated molluscs of the Charente Maritime, a bag of fifty of which was bought by some friends of ours when they were staying with us some years ago. Jenny likes snails, but not to eat, whereas the others in the company felt exactly the opposite emotion. Snails do not arrive easily on the plate: it takes meticulous preparation to create such a tiny feast. Check out the link below. 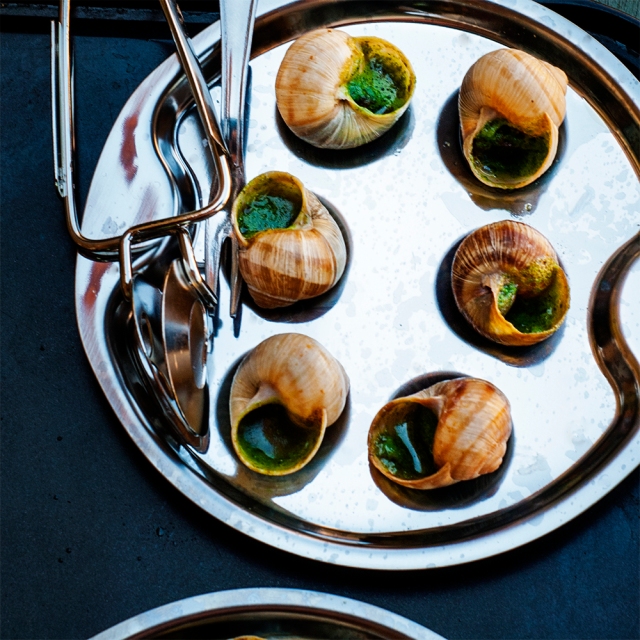 In the final analysis it’s the pleasure of eating hot garlic butter soaked up in good bread that makes the snails so good to eat, which anathema may well have me tarred, feathered and ridden out of town backwards on a racing snail by the local amateurs of the “cagouille”..