Coming out of one’s shell… 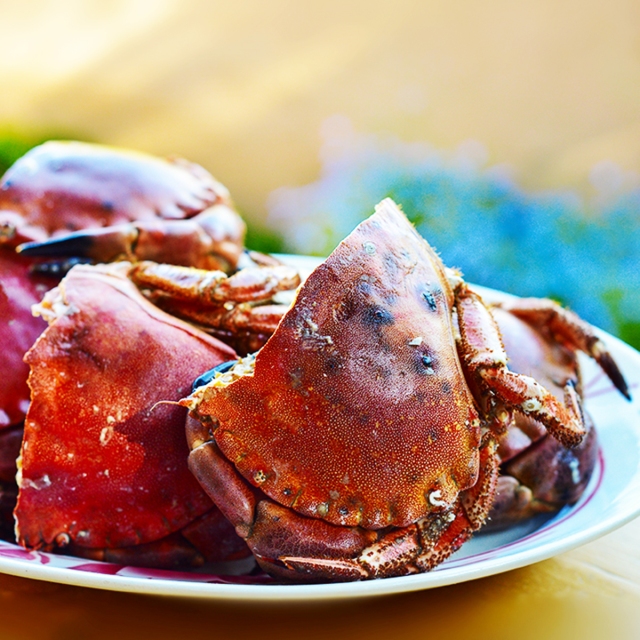 Me: “I’d like six half crabs to pick up early on Saturday morning, please”
Fish counter person: ” Would you like them alive or cooked, Sir”

My look of surprise touched with horror made it clear that I was against the plan of cutting living crabs in half, so the fish counter person ticked the “cooked” box, on the order form, for the faint hearted rosbif who was over sensitive about cruelty to crabs, which lack of esprit clearly made this Frenchmen wonder if the loss at Waterloo was really a lost luggage report at the station rather than a military defeat by folk who have qualms about sundering a crab. Such was my slightly surreal moment of ordering the crabs for an al fresco lunch. The small part of me that remains on the other side of La Manche has memories of dressed crab….if truth be told, it’s really the very large part of Jenny that remains on the other side of the English Channel that remembers dressed crab. For my part, I prefer to be  served a complete crab, as dismantling the cooked crustacean with the set of ersatz surgical utensils provided, looking as though they would provide Gilles de Rais with an afternoon’s pleasure and his victim with seemingly endless misery, is an essential part of the delights of a prolonged feast of fruits de mer. However, dressed crab had been specified and, as undressing is closer to the Gallic psyche than dressing, such a crab is hard to come by here, even for ready money. The term “dressing” initially suggests covering, whereas the “dressing” that relates to a crab relies solely on discovering. To get to the meat of a crab entails removing a suit of carefully constructed armour that was not conceived to be removed with any sort of ease, or at all. One would imagine that bisecting a crab would provide easy access to the sweet white flesh that is the dressed crab lover’s partiality….if only this were true. The white meat is hidden in a labyrinth of tiny sealed chambers the walls of which must be individually breached before the minute quantity of flesh, that resides in each such chamber, can be carefully winkled out with a fine, two pronged instrument specifically designed for such work. There is a savage beauty in this performance if it is done, but once, to the crab on one’s own plate whilst accompanied by the pleasant ebb and flow of conversation together with those same tidal qualities appertaining to the  wine in one’s glass. Six crabs is a long time in politics and and an even longer time in the kitchen but, as with foreplay, it might be fucking annoying but the end result, if not earth moving, is jolly nice.

55 Responses to Coming out of one’s shell…