I don’t know much about a science book, and I don’t know much about the French I took …but anything I’m not sure about, as long as it’s to do with vegetables or local French, can be resolved by our neighbours, Fernand and Jeanette. Fernand has recently retired from a lifetime of farming which has taken its toll of his back. To avoid the endless bending, which cultivating a vegetable patch demands, all operations are carried out, as far as possible, in a sedentary position.

A pink painted, tubular metal garden stool is used for lifting last year’s plants in preparation for turning the soil for the new planting. To keep within this chromatic scheme, a bright orange mini tractor will be used for preparing the soil, and then back to the pink throne for the planting. Interestingly, and wisely, Fernand has not opted for the same colour scheme in his work attire so, had it not been for the vibrant pink work station, I would not have spotted him lifting the remnants of last year’s leeks. As it happened, he had already put aside for me a pile of these delicious, tiny leeks. I spent some time sorting them into bunches this morning whilst deciding what to do with them. There will definitely be some leeks vinaigrette which are amongst my favourite hors d’oeuvre, particularly when they are this small and fresh. A leek tart, with very short pastry, has to be a possibility as does a cheese and leek soufflé, which I haven’t made for some time. Soufflés were always a challenge to photograph for film or stills. Speed was always of the essence, but I remember trying all sorts of bizarre tricks to make them stay risen for that moment longer than expected. Amongst the ruses was the placing of thick iron nuts and bolts in the bottom of the soufflé dish, the intention being that the iron objects would absorb a great deal of heat in the cooking process and retain some of it when the soufflés were taken out,  and in so doing provide residual heat to prevent the immediate collapse of the dish. I don’t think it was totally  successful and I strongly advise against using it at home. A sixpence in the Christmas pudding is amusing, but a red hot iron bolt in a mouthful of soufflé is going to lose you friends ….and maybe some of your own teeth. 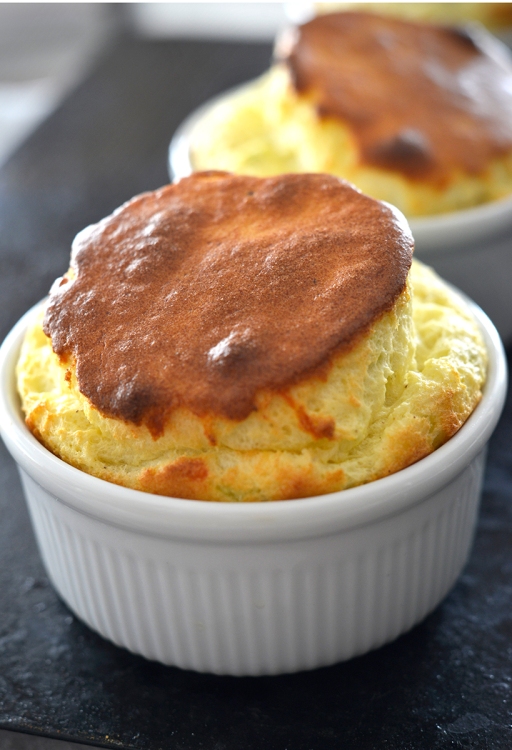 Here’s one or two that I have just made…there were three but I had to eat one…I left out the nuts and bolts and just shot very quickly. Here’s the recipe that I found on British and Irish Food – http://britishfood.about.com/od/recipeindex/r/cheeseleeksouff.htm