Sausage and mash with onion gravy ….. a good cure for grey Januariness..

White is absent; grey is in the ascendant. We are at the beginning of our happy new year yet our hopes are already pinned on tomorrow.  Rain drops fall from the eaves mimicking the sound of irregular footsteps but no one stirs from their homes. It’s as though the world has paused to take stock of the promises and hopes that we have made on its behalf. Such a time as this calls for stiff resolve or, in the absence of that, fried sausages with creamy mashed potatoes and full flavoured onion gravy.  This is a dish that is as good as you want to make it. Its success lies in the time and care taken over its preparation. One might say that it is slow food in fast foods’ clothing. 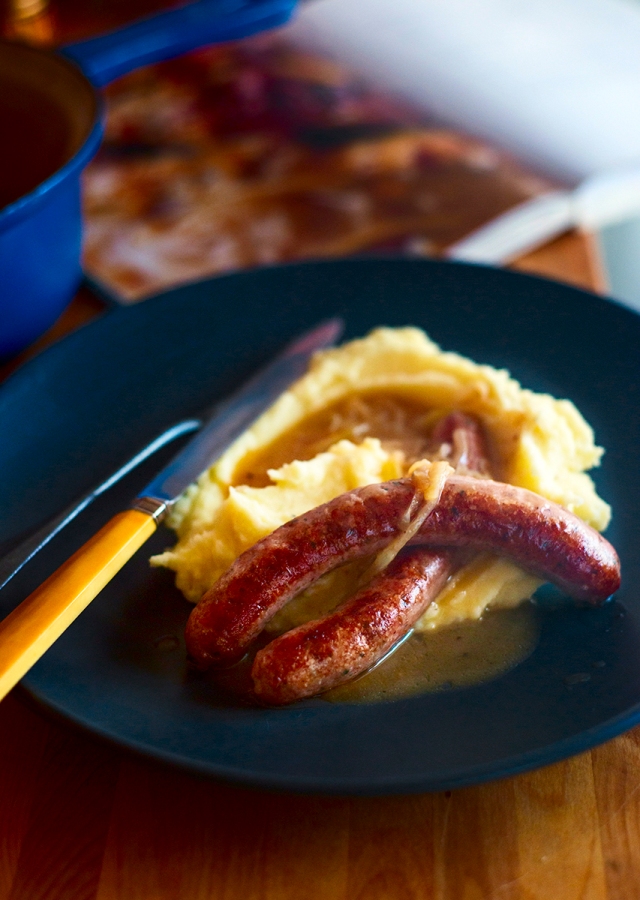 Mashed potato can be fuel or ambrosia. I prefer the latter which comes at a price, which is mostly paid in the currency of time. I use the potatoes that are available to me, which do not include the floury potatoes to which I used to be accustomed and without which I believed that good mash could not be made. I was wrong. Put the peeled potatoes, cut into quarters, into a saucepan and cover with cold water. Bring them to the boil, adding some sea salt to the water, and leave them to cook until a pointed knife pierces them easily. Drain the potatoes and pass them through a potato ricer. Measured quantities are not at the forefront of my mind as I begin to enhance the creamy mass of smooth potato. A large lump of unsalted butter starts to melt into golden yellow pools which are stirred into the mass with a wooden spoon. Richness of flavour and depth of colour is enhanced with the addition of a whole egg and several large spoonfuls of creme fraiche. The unctuous mass needs seasoning and I supply it with white pepper, a grate of nutmeg and a pinch of sea salt. If the purée is too dense, it can be loosened with with some hot milk. The flavour of the mashed potato should be such that it would not matter that much if you had forgotten to cook any sausages. If you have not forgotten to cook the sausages, let them have been cooked slowly so that they have a sticky, caramelised coating. The onion gravy comes from the pen of Nigel Slater and is as delicious as it is simple:

Slice two onions thinly and slowly soften them in a thick bottomed pan with a large knob of butter. The onions should not brown, but slowly soften and turn slightly golden, which process may take some 20 minutes or so.  At this point,  put a lid on the pan and leave the onions to darken. Once this is achieved, stir in a level tablespoonful of flour and cook for several minutes, before adding 250ml of stock and 75ml of Madeira. Season with salt, pepper and Worcestershire sauce and cook until the gravy is smooth and flavoursome.

We had a  very good lemon tart for pudding, of which more at another time….

53 Responses to Sausage and mash with onion gravy ….. a good cure for grey Januariness..