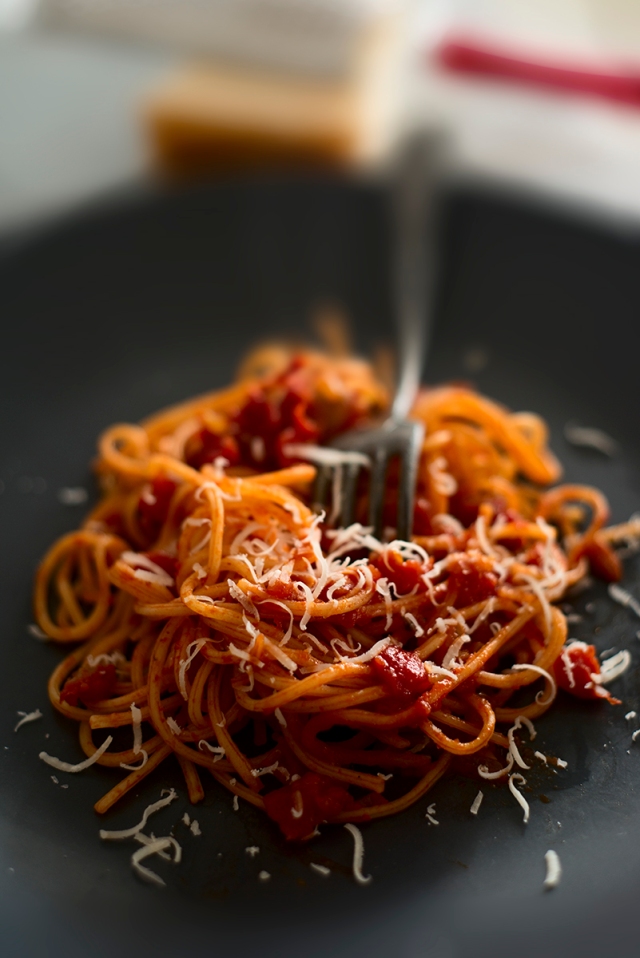 It is well known that the tomato has a colourful history, filled with misunderstanding, suspicion and rumour. However, it has now not only found acceptance but has become so deeply ingrained in our food tradition that several highly seasoned purées of this previously highly suspect fruit have achieved near iconic status. Ironically, it is not the fresh tomato that has stormed the barricades, but the tinned, bottled and fucked about varieties that have overwhelmed our prejudices and found a foothold in every kitchen. Never have food allergies been so prevalent, or so clearly recorded, as in this present time.  General intolerance is not unusual in mankind but that which relates to food is particularly ill suited to life on a hungry planet, yet such intolerance is rare where the tomato is concerned.

Over the last few days I have been watching a lot of tomato cooking and bloodshed. It’s made me see red; red being the prime colour and taste of both a goodfella’s palette and palate . If orange tartrazine makes innocent children hyperactive, there’s no question that red tomatazine makes sociopaths hypervindictive. An episode of the Sopranos is unimaginable without a series of cameo performances by the versatile tinned tomato; it surprises me that they do not receive the credit, that they fully deserve, with the other members of the cast who often have smaller parts ( that’s not a very nice thing to say, I know).  Each gripping episode features a series of conspiratorial gatherings in varied locations, invariably around a groaning table, primarily involving keenly debated discussions on the number of tins of tomatoes to be put into the sauce, the importance of which far outweighs the interest  in deciding the number of disrespectful goombas who need to be “clipped”that day …. after lunch of course.  I say lunch, but it’s hard to define exact meal nomenclatures in the life of a goodfella as a large proportion of his time is spent with a knife and fork in his hand; for the other part, he just puts down the fork. Why did J. Edgar never think of just banning the importation of tinned tomatoes? Lysistrata knew which side her bed was buttered.  No self respecting paesan could have carried on being beastly without the regular availability of steaming tureens filled with meatballs, sausages, spaghetti, and meat loaf all bathed in a red mist of carefully constructed tomato sauce. There should be a codecil to the Second Amendment stating that bearing firearms is fine, but not after eating anything containing tinned tomatoes.