The neutral grey of the sky only served to accentuate the multiplicity of greens and ochres that make up the “slap” on the face of the countryside at this time of year. Driving along shiny, rain slick, black lanes this morning was stimulating. The grey skies were temporary, I had decided, and I was content to be heading out on my errands with the soft, water colour countryside flashing past my peripheral vision. The many life size effigies of Christ nailed to larger than life wooden crosses did not remind me of self sacrifice but of the beastliness that seems to lie just below the surface of our nature. I felt less happy for that and moved on to radishes. 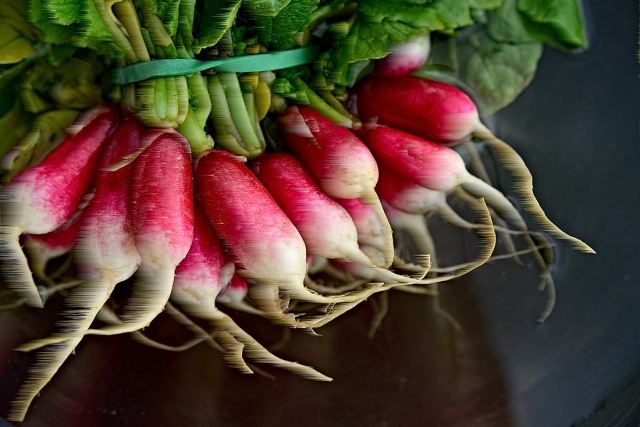 Radishes and I are still in a honeymoon period, be it a longer than usual honeymoon. Few people would complain of such a long honeymoon, although I envisage great wear and tear if one of the protagonists were not a radish. My lune de miel with radishes begun a few years after my arrival here in France. I had known radishes before but none had impressed me enough to want to go all the way: to be honest, I had toyed with a bunch of them, never intending to make an honest radish from any of them. It took a French radis to draw me headlong into what became a torrid affair, often involving the use of butter in what might be seen as an homage to Last Tango in Paris. Familiarity and contempt, however, had introduced themselves to each other and it would not be long before they started to breed.

The wonderful blog, “Tales  of Ambrosia”, came recently to my rescue with a sparkling recipe for pickled radishes, which has  introduced a frisson of excitement into what could have been an ugly break up.

Wash and separate a bunch of good radishes. Quarter them lengthwise, preserving some of the green leaves, and put them in a white china bowl. Pour over them a tablespoon of white wine vinegar, a couple of teaspoons of brown sugar together with salt and black pepper. Stir the radishes together with the seasoning and leave them to macerate in the fridge. I haven’t managed to put them into a sandwich or any form of recipes, so far, as I eat them as soon as I make them. A very good snack….that’s the trouble with radishes, I can’t leave them alone.

28 Responses to Cross words and radishes….