” What is the matter with Mary Jane?

Risotto rice being turned in oil with shallots

..and it’s lovely rice pudding for dinner again!” I knew from an early age what was the matter with Mary Jane. She, very wisely, fucking hated rice pudding from the first moment that her misguided English mother served her a particularly vile version of this shining example of what is laughingly known as “English nursery food”. Nursery food is the San Andreas fault in the privileged classes of English society. It might well account for the “asses” in “classes”. Overcooked, barely seasoned food was the staple diet of the poor, because that is all they had, and it was also the chosen diet of the rich, because that is what they liked. Poor children were bullied and beaten as a matter of survival in the rough environment into which they had unwillingly been thrust, whereas the wealthy had to pay a great deal of money to recreate a similar scenario for their offspring in vastly expensive private institutions where buggery, bullying and privilege walked hand in hand: it’s not a far cry for the imagination to work out a possible origin for the name of the Bullingdon. The battle of Waterloo may well have been won on the playing fields of Eton, but the experiences in the showers afterwards probably led quite a few alumni to the public conveniences of Waterloo Station to relive those stimulating moments.

Back to rice. We were not immediate bedfellows, unlike those victors of Waterloo. Foil containers littered with half eaten takeaways and dead cigarette ends are amongst  my clearest youthful memories of rice. Rice was a sustainer, a substance to pack out the highly coloured MSG flavoured gloop that no indigenous Chinese would have recognised as part of his national cuisine. It took me a long time to recognise the glamour in rice and I can clearly remember when I found it and where. It was, of course, in Italy. I was offered a dish of Risi e Bisi at which I couldn’t turn my nose up because it was offered by friends. Risi e Bisi needs to be soupy, a fact of which I, the ingénue,  was unaware. The visual attributes of sloppy, soupy rice and peas do not immediately make the heart strings go “zing”, but the first mouthful did the business. I realised that I had badly misjudged rice.  It’s taken a while, but rice and I are good now. This is a simple risotto of prawn, lemon, peas and white wine. 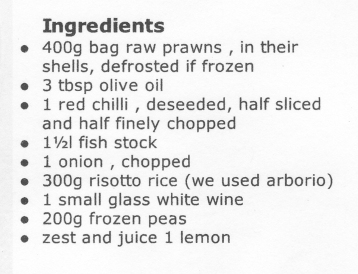 38 Responses to ” What is the matter with Mary Jane?