The absurdity of loving the artichoke

Posted on September 11, 2011 by Food,Photography & France

The Camus de Bretagne is thought by many to be as unapproachable as the eponymous author, Albert Camus, whose books, as an intense young art student hungry for “culture”, I devoured as greedily as I now devour the artichokes that absurdly bear his name. As he was a polemicist of the philosophy of the absurd it is not surprising that we commemorate him with a seemingly inedible foodstuff.

There is, however, something irresistible, even to the uninitiated, about market stalls piled high with these softly green vegetables which, with their near uniformity of appearance, might have been produced by metal workers rather than the muddy booted sons of the Breton sod.

Mother nature must gain a great deal of amusement in watching over the “smartest creature” on the planet struggling to enjoy the content of her whimsical conceits such as sea urchins, oysters, chestnuts and the artichoke.

It is a shame that there is a majority in our sophisticated Western society who would rather solve a “Sudoku”  puzzle (what is it with puzzle books, or should I say “apps”?) rather than enjoy disrobing a meltingly soft artichoke, leaf by leaf until arriving at the subtle and delicious heart of the matter, without a drop of blood being spilt, save one’s own in the preparation. The essence of the artichoke, and maybe of today, may well be summed up by Camus – “I can accept periods of unhappiness, because I know I will also experience happiness”. 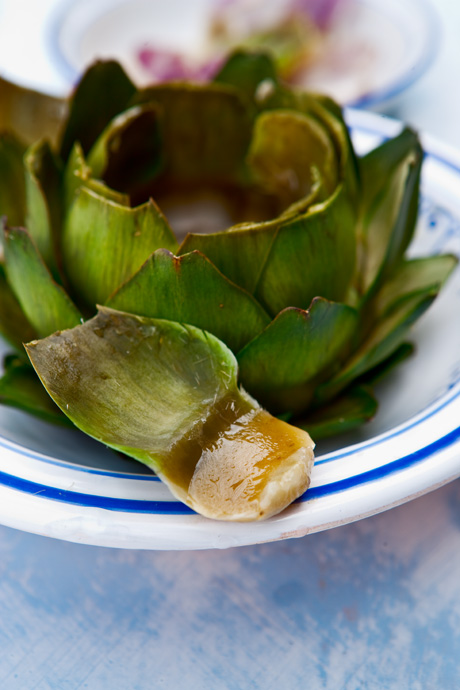 14 Responses to The absurdity of loving the artichoke