Ruminating on the dangers of rumination

Posted on September 3, 2011 by Food,Photography & France

Sitting outside the house last night, as the sun was going down, I thought I was ruminating, but luckily I wasn’t as Wikipedia has made it clear to me that, if I had been, I would be  a suitable case for the treatment of clinical depression at the Priory before I could say knife, which word, if senselessly repeated, would find me quickly in residence at one of Her Majesty’s hotels for the criminally insane. So, let me be clear, I wasn’t ruminating. What I must have been doing was reflecting on how content I was to be draining the last drops of red wine from my glass after eating late summer on a plate.

It is ironic that so many of the tastes that I associate with summer only develop their hoped for depth of flavour when forgotten autumn has already begun a stealthy campaign to depose the reigning season. So it is with tomatoes, peaches, courgettes, peppers, aubergines, tiny potatoes, bundles of fresh herbs and fresh goat cheeses. Last night I made a third version of an oringinal recipe that I was given by Mary Cadogan. 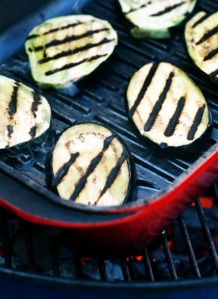 The second version was made by Ambrosiana which appeared in her blog last week. This most recent version involved a large Le Creuset griddle, placed on top of the barbecue, which created the most wonderful smokey aubergines, and thick, burnt edged slices of tomato. Concealed between each layer of aubergine was a slice of seasoned tomato and a thin slice of buffalo mozzarella, which had been brushed with a light basil sauce. Once reconstructed the aubergine still held some of the warmth from its ordeal on the barbecue, as did the tomato. The aubergines were served with side dishes of fresh breadcrumbs, that had been prepared with salt, pepper, olive oil and parmesan as well as a bowl of creme fraiche with tarragon ( this is Ambrosiana’s idea) and thin slices of marinated and grilled courgettes. A dessert of peches plates and melon left me in the mood to ruminate to which temptation I thankfully did not succumb.

13 Responses to Ruminating on the dangers of rumination