A wonderful Sunday lunch in the French countryside.

There was, in times past, a correctness about eating Sunday lunch in a well run hotel restaurant in provincial France, which happily is still evident at Hotel Le Central in Coulon, a small village in the heart of the Marais Poitevin.  The absence of dress code, in both the young staff and the infinitely more senior punters, is delightful but might lead one to believe that this will not be “comme il faut”. This frisson of worry is erased on entering the dining room. The tables are covered in crisp white napery, and are laid with immaculately clean glassware, singularly oddly patterned plates that must have been chosen whilst on an absinthe drinking binge and a surgical range of base metal cutlery from another era which clues quickly establish this as a home of cuisine bourgeoise.

Although the ratio of staff to customers is incredibly low, the service flows gently and efficiently with a wonderful lack of fawning, subservience or over attentiveness. None of the staff are blind, which is very encouraging when catching their attention, which can be done with a simple look in their direction, and for the most part their faces still have the musculature to create a very convincing smile rather than the traditional rictus of disdain. I have been in restaurants where firing a maroon would have gone unnoticed by the sightless and careless staff whose sole mission in life is to hover, like elusive house flies, around your table in order to take every opportunity to break the flow of your conversation by relentlessly filling your giant wine glasses with the bottle of carefully chosen wine that you hoped you might enjoy at your chosen pace. Therefore, the scene is set – a sunny, congenial room filled with the hum of conversation of hungry people making their selection from a happily not extensive menu, whilst sparkling glasses filled with wine rise and fall with metronomic regularity. 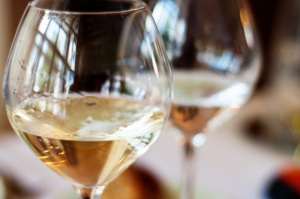 This is not to be a restaurant review, just a moment’s reflection on a day gone past filled with tiny details on which, through the pictures that I take, I am able to ponder. This particular sort of restaurant wisely serves a limited range of dishes which are all done very well. Unfortunately some vestiges of modernity have crept in which can only be excused as change for change’s sake. Serving a wonderful carré d’agneau on a strangely convoluted glass plate cannot be an improvement on white china, 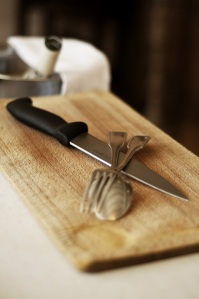 nor can a very good gratin of local eels be made more delicious by being served on a piece of slate. The good news is that everything, except the eclectic choices of the plate meister, are as they should be. A perfectly simple wooden board, with carving implements was put on the table to await the lamb, which gave a clear signal that we were awaiting some proper food. I love eels but at that moment I was wishing that I had ordered the lamb – then I thought of our two neighbouring sheep that I had happily fed with pain aux cereales and brioche that very morning and was happy in my resolve to eat eels, which sad race seem to be short of admirers and friends. Eel lovers are rare, although I do remember an eel lovers society in the London advertising fraternity of the 70’s, headed by two of the most talented creative minds of that generation – Paul Leaves and Rooney Carruthers – names to conjure with.

Meanwhile, I got eels and the lamb went to Ambrosiana. There is little theatre that can be offered to a metal casserole containing a gratin of eels and I must remember this for future menu pondering, but sour grapes are not for food lovers ( may be not, but I was mostly certainly tasting them at that moment) There was nothing for it but to order a “declinaison” of three superb creme glacés flavoured with cognac, pineau de Charentes and angelica.

Photographer and film maker living in France. After a long career in London, my wife and I have settled in the Vendee, where we run residential digital photography courses with a strong gastronomic flavour.
View all posts by Food,Photography & France →
This entry was posted in carre d'agneau, cognac, Cooking, Cuisine bourgeoise, desserts, food, Food and Photography, France, Photography, Photography holiday, Pineau de Charente, Uncategorized, Writing. Bookmark the permalink.

13 Responses to A wonderful Sunday lunch in the French countryside.